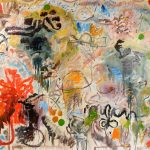 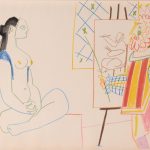 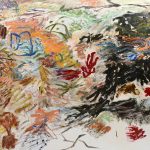 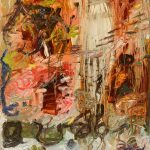 The works represented in this gallery are from the estate of the late Peter McLaughlin, a well-known Denver businessman and philanthropist with a passion for collecting.

Frank Ettenberg has been involved with art since 1960. That year he decided to become an artist. Nothing has dissuaded him since then. From that beginning, Frank’s been been drawn to
seeing what he can do with non-objective picturemaking. Part of his journey is to be seen here. Imagination has much to do with it, also a love of contrast, and efficient, ingenious, &
sometimes intese working process. Inspired and engaging, this sort of process is sought after, no matter where it might be seen.

Pablo Picasso (October 25, 1881 to April 8, 1973) was a Spanish expatriate painter, sculptor, printmaker, ceramicist and stage designer considered one of the greatest and most influential
artists of the 20th century and the co-creator, along with Georges Braque, of Cubism. Considered radical in his work, Picasso continues to garner reverence for his technical mastery,
visionary creativity and profound empathy. Together, these qualities have distinguished the “disquieting” Spaniard with the “sombrepiercing” eyes as a revolutionary artist.
For nearly 80 of his 91 years, Picasso devoted himself to an artistic production that he superstitiously believed would keep him alive, contributing significantly to — and paralleling the
entire development of — modern art in the 20th century.

Pablo Picasso remains renowned for endlessly reinventing himself, switching between styles so radically different that his life’s work seems to be the product of five or six great artists
rather than just one. Of his penchant for style diversity, Picasso insisted that his varied work was not indicative of radical shifts throughout his career, but, rather, of his dedication to
objectively evaluating for each piece the form and technique best suited to achieve his desired effect. “Whenever I wanted to say something, I said it the way I believed I should,” he explained.
“Different themes inevitably require different methods of expression. This does not imply either evolution or progress; it is a matter of following the

Sam Scott was born in Chicago, IL in 1940. He started attending classes at the Chicago Art Institute at the age of ten.
He lived with the Oglala Sioux people in South Dakota in 1958, when he was eighteen. He committed to painting in Florence,
Italy in 1963 at the age of 23. At this time he had his first one-person show in Rome.

In 1965, after a brief period as a commercial fisherman in Kodiak, Alaska, Scott was offered a job teaching at Morgan State
College in Baltimore, Md. Here his work was seen by Eugene Leak, the President of the Maryland Institute College of Art,
and Scott was offered a full scholarship and teaching job there. Some of Scott’s teachers during this time include: Clyfford
Still, Philip Guston, David Hare, Grace Hartigan, and Salvatore Scarpitta. During this period Scott also served his country on
a classified mission to the Amazon Jungle working for the DOE and the State Department. As a result of this mission and
others, all atmospheric testing of nuclear weapons by the United States was stopped. Scott graduated Summa Cum Laude
at the head of his class and was awarded the Walters Art Museum Traveling Scholarship award to the outstanding graduate
student.

In 1969 Scott settled down in Santa Fe. In 1974 he was awarded the first one-person show ever given to a living artist by
the New Mexico Fine Arts Museum. In 1975 Scott was among the first artists to represent New Mexico at the Whitney
Museum Biennial of Contemporary Art in New York City. In 1977 Scott was one of three artists selected to represent 110
artists at the City Council of Santa Fe, and he was elected at that time also to direct and hang the first Santa Fe Amory Show.

In 1978 Scott accepted a teaching position at the University of Arizona and was subsequently invited to become a tenure
track Professor of Painting and Drawing. Scott returned to Santa Fe in 1983 and has been based there and in Pilar, New
Mexico since that time.

In 1994 Scott received the Mayor’s Award for Excellence in the Visual Arts from the City of Santa Fe, New Mexico.

In 1995 Scott was invited to address the United Nations, where he was awarded the Peace Rose by Sri Chinmoy, of the
United Nations Peace Meditation Group. In 1997 Scott was given a thirty-year retrospective at the New Mexico Fine Arts
Museum, entitled “Sam Scott: An American Voice Paintings 1967-1997. In 1999 Scott was one of three artists chosen by
the State Department to represent the United States in person at its first post-war cultural exchange with the republic of
Vietnam, through the Meridian Foundation and the Kimsey Foundation.

In 2002, Scott was among the first American painters to be invited to show at La Maison Francaise Museum of Contemporary
Art at the Embassy of France in Washington, D.C.

In 2007, Scott wrote “Encounters with Beauty: Excerpts from an Artists Journal 1963-2006”, which was edited and with an
introduction by William Peterson. This book was one of three finalists for the New Mexico Book Awards Foundation
“Best Book: Other/Non-Fiction”

2010, Scott is given a 30-year retrospective by the Harwood Art Museum, Taos, NM.

Sam Scott is one of five artists in various media who have been chosen to represent the Capital Art Collection as a “State
Treasure”, in the Capital Building of Santa Fe.

Present, Scott lives with his wife, Leslie McNamara, dog, Pavi and cat Streak, in Santa Fe, where he enjoys walking to work
at his studio every day.